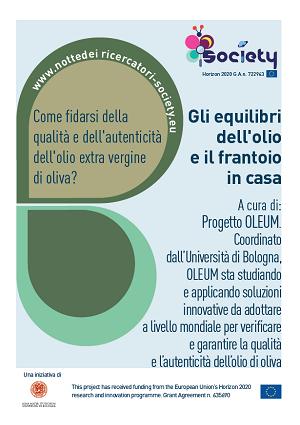 A leaflet created by the University of Bologna was presented at the Notte europea dei ricercatori (The European Researcher's Night), in Cesana, Italy, on 30 September 2016. The leaflet (in Italian) explained what are virgin olive oils and how to produce them at home!

The European Researchers' Night is an initiative promoted by the European Commission since 2005 that involves thousands of researchers and research institutions in all European countries annualy. It takes place throughout Europe every year on the last Friday of September. In 2016 the event was held on Friday, September 30 in more than 250 cities. The goal is to create opportunities for interaction between researchers and citizens to spread scientific culture and knowledge of the research profession in an informal and stimulating environment. Events include experiments and live science demonstrations, exhibitions and guided tours, lectures and educational seminars, shows, concerts and artistic performances. The Night is supported by the European Commission under the Marie Sklodowska-Curie Actions, an EU program with the aim of promoting the careers of researchers in Europe.